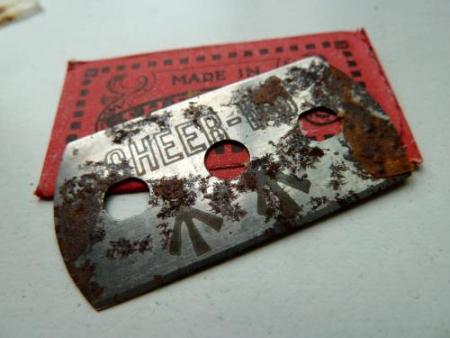 An interesting and 100% original WW2 Cheerio razor blade, these were produced as standard useable razor blades but were also magnetised North for use as a compass, the war department arrow was marked to the blade,
, these would have been floated on still water, being light and flat/spread out they float well on the surface of the water, we have tried them and they work nicely, once settled the beginning of the lettering end of the blade points north.
, these are the exact same as the magnetised blades produced by the Fleet razor blade company but called Cheerio and by the Wafer Razor Co Ltd Sheffield, in fact the name Cheerio may well have been used as a sneer to the unsuspecting Germans (cheerio or goodbye to the enemy when using it to escape). As can be seen in the photos the outer packaging is good but the inside waxy paper has stuck to the blade one side of the blade is pretty good and the north facing arrows are clear but there are surface rust spots, the other side is a little more rusty but nothing deep only surface, with a little care this will clean up better gently using wire wool. A nice original escape & evasion item as sent to POW camps etc.